Education issues could be a major factor in their opposing legislative endorsements. “This draconian order is contrary to the Texas spirit and invades the liberties the people of Texas protected in the constitution.”

The case went viral last year, serving as an example of the broken state of CPS and serving as a rallying cry for parental rights activists nationwide. “The type of decisions that Abbott is making were never intended to be made in a unilateral way.”

Despite teachers unions’ radical left-wing views, the Republican-led state legislature has failed to act to stop the threat.

JoAnn Fleming: Time to Get Involved

The “purple session” and property tax reform is the signal that it’s time for the grassroots to get involved with their local governments.

Texans must stand united in keeping Texas conservative in 2020 or risk losing it for good.

An explanation by the Texas Education Agency about the reform reveals discrepancies between its actual effect and misleading news reports.

A law legalizing industrial hemp is having unintended consequences. Texans can look to Gov. Abbott to call a special session to fix the problem.

“Teresa is a hardworking advocate for liberty and has earned the trust of grassroots conservatives across the state.”

The former Speaker of the Texas House is seeking a return to political relevancy with a new PAC.

When government resorts to advertising its programs and services, thatâ€™s a sure sign government has gotten just a little too big.Â

Antonio and around the state are preparing to ask their voters to approve tax rate increases.Â  One such district is San Antonio ISD which is on the verge of seeking a tax rate increase even though its superintendent admits itÂ "has been running inefficiently, with one-third of its available facility space going unused."Â

In what is either a rare act of political honesty or an unbelievable admission of dereliction of duty, or both, State Rep. Fred Hill (R-Richardson) swore under oath that he doesnâ€™t know anything about the stateâ€™s existing spending limit.

Odd, considering he has served for years on the extremely powerful Legislative Budget Board â€“ the 10 appointed members of which are specifically charged by the Legislature to â€œAdopt a constitutional spending limit.â€ In fact, that is the first responsibility listed on the LBB web site!

â€œI do not have any involvement in the development or calculation of the State spending limit,â€ swore Mr. Hill on August 7, 2007.Â Â (Taxpayers and voters would be excused if they break into aÂ little swearing of their own at this point.)

You might recall a few weeks ago I noted that the Legislatureâ€™s new $3 billion-over-10-year cancer fund was probably not going to accomplish much more than spend a lot of your money. Not my opinion, but that of scientists actually in the field.Â  "(T)he question is how to get the best bang for your buck. I don't think that's done by politicizing diseases and putting them on the ballot," said the chief of staff at Ben Taub Hospital. 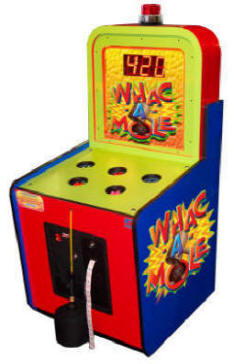 Fighting tax-and-spendoholics is like playing Wack-A-Mole at the arcade. You knock them down, only to find they pop right back up. The lesson? We have to move faster and hit harder.

Last legislative session, taxpayers were successful in stopping tax-and-spendoholics from increasing the taxes to fund further boondoggle spending on more light-rail and other mass transit pork (the only thing â€œmassâ€ is the cost â€“ mass transit fails to actually relieve congestion, dollar for dollar). But, hey, those trains are fun at Disney World…

Road Taxes Should Fund Roads? What A Crazy Idea…

State Sen. John Carona says in todayâ€™s Dallas Morning News that Texas must â€œstop the diversion of gas tax funds for other uses.â€ Thatâ€™s welcome news. While the stateâ€™s constitution currently requires transportation funds to be used for transportation expenses, â€œtransportationâ€ is a constantly-expending term.

According to the Morning News, almost a third of Texasâ€™ gasoline tax revenues for transportation have been â€œdivertedâ€ away from true transportation projects.

Advocates of big government rarely let facts get in the way of their pursuit of growing budgets. Such is the case with Waco Tribune-Herald editor John Young, whose weekly column is very often devoted to the worship of government (of the activist variety) and the damnation of conservative, free market principles.

The headline in today's Houston Chronicle says it all: City union asks for property tax relief. My heart leapt for joy: Bureaucrats are now joining the call for tax relief!

But then I read the article… They don't want property tax relief for all taxpayers, only for government employees. Acting in true-to-bureaucratic form, the city employee union there is looking for a new taxpayer-funded program that would pay the property taxes of city employees. The audacity almost makes the head spin.

The Houston Chronicle reported over the weekend that medical professionals are skeptical that the legislature's new $3 billion "cancer fund" will accomplish much more than spend $3 billion of the taxpayers' money.

But, don't worry, it was created with the best of intentions… State Rep. Senfronia Thompson (D-Houston), summed it up nicely in her quote to the Chronicle that "she'd â€˜like to sit back and tell my grandchildren I had something to do with the cure.' "