This weekend saw bloated-bureaucracy shills on the attack against the need to limit government growth. In doing so, they demonstrate a casual disregard for both good public policy and the expressed will of the governed: Texas’ voters.

The general idea is well understood: limit how much government can grow to a specific measure that cannot be gamed by spenders, requiring an extraordinary effort to override it, such as a popular vote or declaration of an emergency. The most common measure recommended is that of inflation-plus-population, reflecting the people’s ability to pay. 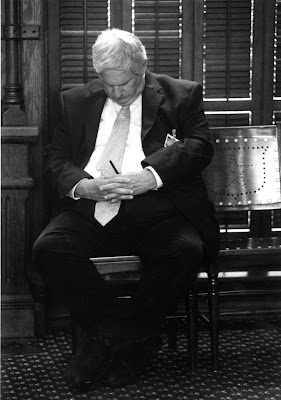 Most vitriolic was Texas Monthly’s statist in-house blogger Paul Burka, as part of his defense of Speaker Joe Straus. The blogger foolishly smeared the idea as one that “makes no sense… a starve-the-beast tactic.”

Mr. Burka would apparently prefer to starve the taxpayers, allow government to live beyond the people’s means and tank the state’s economy.

He brought it up because he only recently became aware that it’s been on the Texans for Fiscal Responsibility candidate questionnaire for years, including the 2012 House questionnaire (pdf).

Voters understand where that leads. From 1990 to 2010, state government has grown some 300 percent; population and inflation over that time-period rose about 150 percent. Sustaining this rate of spending is not economically viable.

Speaker Straus, Paul Burka and their crowd are at odds with the expressed views of Texas’ Republican voters. For three election cycles in a row, GOP primary voters have answered various ballot questions about issues. Not media polls, but actual questions on the actual ballot in the actual voting booth.

In 2006, 2008 and 2010, the Republican primary voters were asked to support or oppose basically the same wording: “Every government body in Texas should be required to limit any annual increase in its budget and spending to the combined increase of population and inflation unless it first gets voter approval to exceed the allowed annual growth or in the case of an official emergency.”

The 2010 response: 91.92 percent for it, 8.07 against. Apparently most of that 8 percent were members of the Texas House leadership, because Speaker Straus and his committee chairmen tanked spending limit legislation.

(By comparison, Republican voters in 2010 were asked about requiring a sonogram be performed before an abortion could took place; it was approved 68.69 percent to 31.3 percent. A question about voter ID was approved 92.88 percent to 7.11 percent.)

On three ballots in a row – six years running! – 90-percent of Texas’ Republican primary voters have called for implementing tighter spending limits in Texas. And in the intervening sessions? Nothing has been done.

The problem Texans must confront is we have a legislative leadership more fiscally in-tune with liberal bloggers like Paul Burka than their own voters. That’s the old-normal; Texans want something better for our state.

Mr. Burka and his fellow old-guard chatterers physically recoil at the very idea of legislators listening to the people on policy questions. It’s elitism at its worst.

For those committed to bloating government, the people exist solely as a source of revenue. We need lawmakers who instead recognize that the people are their source of both governing power and policy insight.