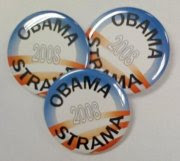 Apparently it was quite the “gag” for Rep. Mark Strama’s reelection bid in 2008.  In fact, Strama was so enamored with the idea of a rhyming ticket that he made sure to link the names in people’s minds – in fact, in 2007, Rep. Mark Strama was one of the first elected officials in Texas to endorse Barack Obama for president. A clever move in a year when Barack Obama’s brand was solid gold – though you have to wonder, how would Strama feel about this now, with Obama’s approval rating plummeting? From Rasmussen just today: 41% approve, 58% disapprove.


Strama has been a leader for the far-left of his party, filing campaign finance legislation that amounted to incumbent protection legislation, voting against moving appraisal board appointments to the hands of elected officials, voting to remove control of the Permanent School Fund from the elected SBOE to an appointed board,  stood against voter identification legislation, for hate crimes legislation, for mandating pre-kindergarten statewide….and there is a lot more where that comes from.  Strama has received the majority of his campaign support from outside the state of Texas, and his donors include George Soros’ daughter Jennifer and pro-abortion advocates Annie’s List.

Whether Rep. Strama feels the need to publicly link himself to the rapidly-falling-from-grace administration in Washington is irrelevant – the connection is clearly there, in ideology and goals.  I don’t think it takes very much to tie the two together, aside from the coincidental rhyming scheme.  They’re both extreme liberals who are out of touch with the people they claim to represent.  They both skated into power masquerading as moderates, and still manage to fool some people.  Obama….Strama.

It does have a certain ring to it.